here is, in the village of the elves, the Dreamy Woods, a curious habit. The night watch is ensured by the youngest inhabitants. Certainly because they need less sleep than the old ones but also to harden them and open them to the safety problems of a city lost in the reeds, at the edge of a vast pond.

This is why, quite naturally, Hamzel and Rotz, the two newcomers in the village and the juniors in the small tribe, had been asked to guard, in this first week of autumn. This evening, it was Rotz’s turn.

Hamzel, his companion, was not lying down for that, more by friendship than by fear of an unspecified night event. Who could attack the Dreamy Woods? The only valuable item, the ‘Dream Stone’, was closely kept by the soldiers of the Great Priestess, hearty fellows ready to sacrifice their life to protect the magic jewel, a sumptuous pure crystal transmitted from generation to generation which showed supernatural powers. Who has it can read the thoughts of any mind.

Who would venture in this village built on piles when it is flooded by the whitish rays of a full moon?

Rotz has always been anxious. So when Hamzel proposed to stand beside him while preparing his delicious raspberry liquor, the big imp was reassured on two points: he was not alone this evening, and his friend dealt with the winter provisions of sweets.

« I’ll return in a moment, » whispered Hamzel. « I go on the bank and gather some herbs to aromatise my potion … »

« Do not delay! » answered Rotz, a bit worried.

The small imp moved towards the drawbridge keeping the entry of the village and unrolled the cord which maintained it raised.

He arrived without problems on the bank. The access pontoon, beaten by the floods endlessly, was worm-eaten in several places. He even failed to fall into the water! In his agitation, he could not hear a small snigger coming from a thorny thicket nearby.

Hamzel once away, a shadow detached and took the direction of the city furtively.

He slipped on board and approached cautiously the Great Priestess’s palace.

In two times, three movements, the guards were neutralized and the stone stolen…!

When Rotz gave the alarm, the robber was already very far away. 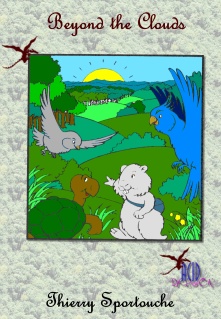 Back to Acid Dragon's home page